Heidi Klum: I Fell In Love After Seeing Seal's 'Package' 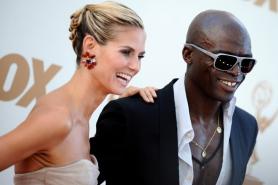 ) and husband Seal were on Oprah Winfrey's show today taping a segment for her 'Superstar Couples' episode, which airs on Thursday.

Oprah asked how the couple met: "I met him in a hotel lobby in New York City and he came in just from the gym and I was sitting there and I was, like, wow," Klum said.

"And I pretty much saw everything... the whole package."

She says from then on, they've worked hard at keeping the 'wow' alive.

Seal was blushing, but added, "the most common hiccup is when it turns into all about the kids, which is understandable because they're miraculous. But then you've got to put each other first. You know, she will always be number one for me."

Klum and Seal married in May of 2005, and are one of the rare celebrity couples who actually look like they get along.