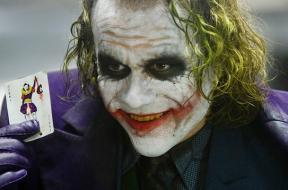 A group of Heath Ledger fans have taken their reverence for the actor's performance as the Joker in 'The Dark Knight' to a whole new level.

The diehard fans have formed a new web site, The Ultimate Joker, which calls for the character to be retired permanently. The group has launched a petition calling for studios to remove the Joker from any future 'Batman' movies. And it's not a handful of people either, the petition currently has over 30,500 signatures from around the globe.

"We think Heath deserves this honor," says Fer Barbella, one of those behind the petition. "He is the ultimate Joker. We are Batman fans from the comics and from the movies. After we saw 'The Dark Knight,' we thought this Joker was really the best."

"It deserves to be withdrawn from any Batman sequels. When Michael Jordan retired, they withdrew the number 23 jersey as an honor. It's the same thing with Heath."

"He upgraded the character in a thrilling way. Although a lot of actors would love the chance to play the Joker, as Batman fans and now Heath Ledger fans, we think no one could ever perform it as well as he did."

Ledger has been nominated for an Academy Award for Best Supporting Actor for his portrayal of the sociopathic clown, following nods in both the Golden Globe's and BAFTAs. However, whether the group's efforts come to fruition or not, it's unlikely that any actor would even want to take up the daunting task of being compared to Ledger's portrayal of the Joker in the near future.