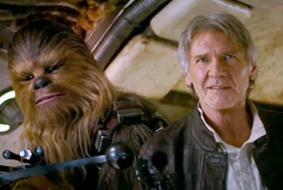 Lucasfilm has released the first cast photo from the upcoming standalone 'Star Wars' movie centered around a young Han Solo.

The cast is huddled together aboard the Millennium Falcon to mark the start of filming at Pinewood Studios in London.

"Watching such inspired people from all over the world, with such unique voices, come together for the sole purpose of making art, is nothing short of miraculous," Lord and Miller said. "We can't think of anything funny to say, because we just feel really moved, and really lucky."