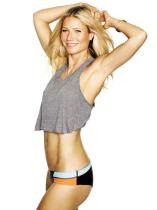 ) covers the latest issue of Women's Health and says, while some people view her as uptight, she doesn't have any hard and fast rules.

"My food philosophy is 'Nothing should be ruled out,' " she tells the magazine. "I don't believe in saying, 'You're not allowed that.' If my kids want a Shirley Temple with the radioactive cherry in it, go for it, you know?"

"Most nights I eat with the kids, like, a stir-fry of chicken and broccoli or pasta or roast chicken and potatoes."

But she says the rule is "whatever I want."

"I believe, as cheesy as it sounds, in exercise, laughing, having sex, being yourself," says Paltrow, who separated from husband Chris Martin a year ago.

She says her regimen may be working because after an hour of cardio every says she feels "more comfortable in a bathing suit now than I did 20 years ago."