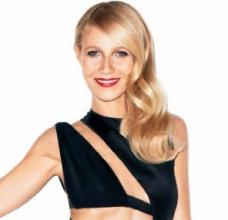 )'s late father once told her she was becoming an "a--hole" because of her fame.

"I remember when I was maybe 27 years old and kind of at the height of my movie stardom — it was around the time of my 1999 Best Actress Oscar for Shakespeare in Love and this and that," she tells Harper's Bazaar.

"I think I was very much believing my own hype, which how could you not?"

"I was sitting with my dad, feeling great about my life and everything that was happening, and he was like, 'You know, you're getting a little weird... You're kind of an a--hole.' And I was like, 'What the hell?' I was totally devastated."

"It turned out to be basically the best thing that ever happened to me," she admits. "It's the difference between someone who loves you more than anything in the world giving you criticism and getting it from some bitter stranger on the internet."

"What my dad said to me was the kind of criticism where I was like, 'Oh, my God, I'm on the wrong track.' I'm so grateful for him doing that. He was such a no-nonsense guy in that sense."