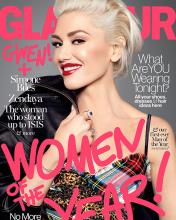 Gwen Stefani opens up about her divorce from Gavin Rossdale in Glamour's 'Women of the Year' issue.

"Sometimes to be woken up again in life, you need to go through some really bad, hard times," says the 'No Doubt' singer and 'The Voice' mentor and. "I feel like I got woken up this year."

Gwen divorced Gavin Rossdale after he allegedly had been cheating on her with their nanny for years.

"I don't think you'll talk to one person who didn't make it in a marriage who's not gonna feel that way. The intention of being married is the vow, right? You want to put everything into it to make it a success."

"My parents just had their 50th anniversary. I had to work really hard at marriage, all the time, like everybody, but ours was extra hard," she adds. "When you add that we're from different countries, both of us being in music, and celebrity."

"Marriage was the one thing I didn't want to fail at. People can say whatever they want to about me…and I don't get too affected. But I didn't want them to think I was a failure," she admits. "There's nothing weird about how I felt."

She's now dating Blake Shelton and says "finding somebody who was going through the exact same experience? That was an inspiration."

Shelton divorced country singer Miranda Lambert around the same time although probably not for the same reasons.

"He was a friend to me when I needed a friend. An unexpected gift. And that became an inspiration in the songwriting."