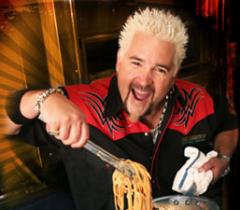 Guy Fieri is finally firing back to Anthony Bourdain's shots at him.

The 'Diners, Drive-ins and Dives' star says the 'Parts Unknown' host has "definitely gotta have issues, 'cos the average person doesn't behave that way."

Bourdain has been lobbing shots at Fieri for years but earlier this year he suggested the Food Network star was a "douche."

"I wonder about him. He's 52 years old and still rolling around in the flame outfit…What does he do? How does Guy Fieri de-douche?," he told Atlanta Magazine.

"It's not that I'm not open to the reality that the food world was like this from a few people's perspectives," says Fieri. "It's just, 'What are you doing? What is your instigation?"

"You have nothing else to f--king worry about than if I have bleached hair or not?' I mean, f--k."