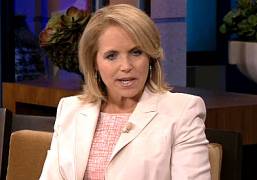 Virginia gun rights activists have filed a $13 million defamation lawsuit against Katie Couric and others involved in a documentary over an edit they say misrepresented their response to a question.

The segment in 'Under the Gun' shows ten seconds of silence after Couric asks members of the Virginia Citizens Defense League how criminals or terrorists could be prevented from purchasing a gun without background checks.

However, the activists say there was no silence and they answered Couric's question almost immediately.

"The manipulated footage falsely informed viewers that the VCDL members had been stumped and had no basis for their position on background checks," states the complaint filed in Virginia federal court.

They blame Couric, who was an executive producer of the film, for putting out the film with an "agenda."

"Although the Defendants knew that their intentional edits were misleading and misrepresented Couric's exchange with the VCDL, they refused to remove the manipulated footage or to present the footage of what had actually taken place."

Couric has said that she regrets that the edit was misleading and that didn't oversee the edits "more vigorously."

The filmmakers have claimed that they put the silence in to "provide a pause for the viewer to have a moment to consider this important question before presenting the facts on Americans' opinions on background checks."