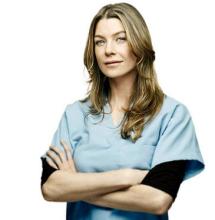 Ellen Pompeo is now the highest paid dramatic TV actress after signing on for two more seasons of 'Grey's Anatomy'.

"I'm 48 now, so I've finally gotten to the place where I'm OK asking for what I deserve, which is something that comes only with age," Pompeo tells THR of returning for at least the drama's 16th season.

"Because I'm not the most 'relevant' actress out there. I know that's the industry perception because I've been this character for 14 years."

Pompeo adds that for years producers used co-star Patrick Dempsey against her in negotiations but that's no longer the case.

"For me, Patrick leaving the show in 2015 was a defining moment, deal-wise. They could always use him as leverage against me — 'We don't need you; we have Patrick' — which they did for years."