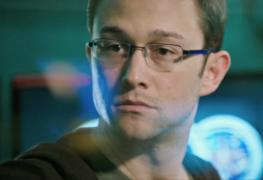 The film, starring Joseph Gordon-Levitt in the title role of Edward Snowden, begins with the character serving in the US Army.

However, after an injury prevents him from serving in the field, Snowden eventually finds himself working for the NSA.

He's presented with a moral dilemma upon learning that the government is conducting mass surveillance and comes up with the idea to copy the classified information onto a tiny computer chip hidden within a Rubik's cube.

"I just want to get this data to the world," he says in best Snowden voice.

), reveals the incredible untold personal story of Edward Snowden, the polarizing figure who exposed shocking illegal surveillance activities by the NSA and became one of the most wanted men in the world," teases the studio.