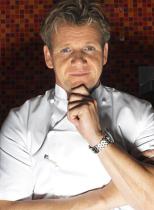 Gordon Ramsay says he was the victim of his own restaurant nightmare because of an unnamed rival.

In an appearance on 'The Jonathan Ross Show', Ramsay said a rival chef tried to spoil the opening of his newest London restaurant, Heddon Street Kitchen, by making fake reservations.

When Ross asked if he thought it was done deliberately, Ramsay replied: "Yeah, sabotage."

Ramsay didn't name the rival but not everyone is believing that a rival hurt the opening.

"We were fortunate to have a large number of walk-ins despite whatever someone's intentions were," the spokesperson for his restaurant said. "We had a terrific, packed launch."