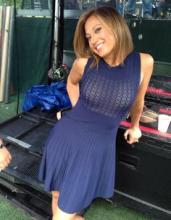 'Good Morning America's Ginger Zee announced she is expecting a boy next February during her weather forecast.

"This is the breaking news part. There's a lesser known visual phenomenon that's about to happen on our maps only for the next five months," she teased.

"These areas are going to have a shadow from my belly because I'm pregnant."

"Another baby! Another boy," Ginger added. "I feel good... five months left... it's gonna get big. That's why I had to tell everybody because it's already happening."