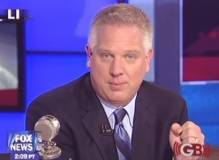 Speaking on his program about his brief stint with ABC News and working with Diane Sawyer, Beck lashed out at the anchor.

"When ABC hired me, I was Diane Sawyer's little bitch," said the outspoken conservative talk-show host.

"She would call me up and my wife would be like, 'What is going on with you and Diane Sawyer?' I was like, 'I don't know.'"

Beck said Sawyer called and e-mailed him "all the time" about her plans to "change television." But then it suddenly stopped.

"So what happens? All of a sudden, I can't even get Diane on the phone. I'm like, 'Hey, what happened? Hello?' Nothing!"

"Finally, about eight months later, she has lunch with me, and she becomes the biggest bigot I've ever seen in my life," he said without expanding on what exactly transpired. "And I'm like, 'You gotta be kidding me.'"

But Beck didn't seem to have much support after his rant as co-hosts Pat Gray and Stu Burguiere went quiet.

"Just keep going. Don't even think about what you're saying. Just go with it. Whatever comes to your mind, just say it."