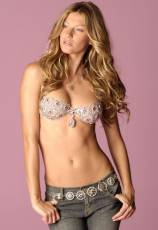 ) may soon be the world's first billionaire supermodel, according to Forbes magazine.

The magazine reports that the woman who has reigned as the world's top-earning model for seven years in a row could soon join the billionaires club thanks to her own line of jewelry, cosmetics and lingerie.

"Her line of sandals with Grendene, one of the world's leading makers of synthetic footwear, is a success both in Brazil and abroad, today rivalling the world-renowned Havaianas brand," writes the publication.

"Last year, Gisele founded Sejaa Pure Skincare, an eco-friendly cosmetics company based in Phoenix. She is in talks to sell a stake in the business but Gisele's biggest potential money-maker is yet to come."

"Eyeing Brazil's growing women's wear market, last May Gisele launched her own lingerie company in a joint venture with Hope (Brazil's version of Victoria's Secret). She'll also own a stake in the company, which could add as much as $19 million per year to her estimated $45 million annual income."

"One thing's for sure," it concludes. "Gisele has walked beyond the traditional runway in a way that few supermodels have been able to do."

Forbes speculates that not only will Gisele Bundchen become the first billionaire supermodel, but also the first Brazilian female self-made billionaire.