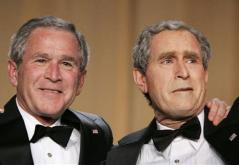 Steve Bridges, an impersonator known for mimicking President George W. Bush, has died. He was 48.

According to the Los Angeles Times, Bridges was found dead at his home after recently returning from a performance in China.

He appears to have died of natural causes. However, an autopsy is planned given his young age.

Bridges' George W. Bush impression made him a regular on 'The Tonight Show With Jay Leno' and earned him an invitation to the White House Correspondents' Association dinner in 2006, where he appeared on stage alongside President Bush.

He could do dozens of voices, from Bill O'Reilly to Rush Limbaugh and Tom Brokaw to Obama, and had been scheduled to do three free shows next week for the Indian Wells Rotary Club to help raise money for students who wanted to go to college.

Steve Bridges usually wore makeup and prosthetics to look like the part, including his look as Bush.

"From the neck up, everything but his teeth was covered in a prosthetic piece of some sort," says his manager, Randy Nolen. "It was as extensive, as good and as complicated as anything you would see in a motion picture."

See his appearance at the White House Correspondents' Association dinner and a short tribute below: