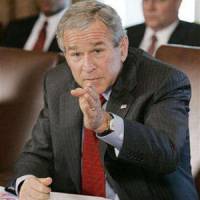 Former President George W. Bush made an appearance on 'The Tonight Show' with Jay Leno Tuesday night and joked he was there just to pay the talk show host one last visit.

"Only because of you," Bush said about why he decided to accept the invite. "I mean you're about to head out to pasture. Just wanted to see what you looked like before you got to the gate."

When Leno commented Bush was looking a lot more relaxed out of the spotlight, he quipped: "No kidding. Duh!"

Bush said he's avoided talking policy in the last few years because "I don't think it's good for the country to have a former president criticize his successor."

The former First Lady joined him later in the interview.