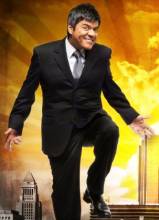 In an interview with Ellen DeGeneres, George Lopez joked about his arrest for public intoxication in Canada earlier this month.

Lopez was arrested after he passed out on the floor of the Caesars Windsor Casino in Windsor, Ontario.

"Recently, I lifted myself off the casino floor in Canada," Lopez said when asked what he had been up to.

"Well, I was a bit intoxicated and the authorities are much politer in Canada," explained Lopez. "'Sir, wake up. Sir, you're under arrest.' Very polite. And they told me 'Sir, this behavior cannot continue and if it does continue, we would be honored if you would be Mayor of Toronto.'"

Of falling asleep on the casino floor, Lopez laughed "You know, I was on the way to my room. I just missed it by 35 floors."

Lopez said he's stopped drinking and claimed he hadn't a drop of alcohol since the incident.

"That was a nice going away party for that guy," he said. "And then I'm the new George now sitting in front of you. Just because Mexicans invented Tequila doesn't mean we can handle it!"