George Clooney On Expecting Twins with Amal: 'It's Going To Be An Adventure' 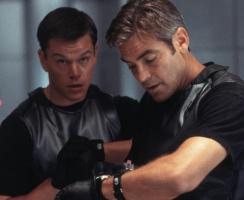 In his first interview since the announcement that he's expecting twins with wife Amal, George Clooney said he was excited.

"We are really happy and really excited. It's going to be an adventure," he told French program Rencontres de Cinema.

"It got really quiet," he said of when he told his closest friends. "And they all just started making baby crying noises, and the whole table just busted up laughing."

"It's going to change a lot of things, but you know, that's life."

Neither Clooney or Amal have been tight-lipped about the sex of their babes. However, Clooney's mother, Nina, apparently let it slip in an interview with Vogue magazine.

"It will be one of each! Yes, a boy and a girl," she said. "That's what I've been told. How marvelous! My husband and I are extremely excited."

"We were with them and they told us together. We were all together, and it was lovely. It was just a personal moment," she said. "I think he'll be great, and I think she'll be a great mom!"