'Gay' Comment Deleted From Trailer After Anderson Cooper Speaks Out 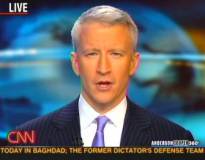 A trailer for Vince Vaughn's new film 'The Dilemma' has been edited, after CNN's Anderson Cooper criticized Universal for using the word 'gay' in a pejorative context.

"I was sitting in a movie theater over the weekend and there was a preview of a movie, and in it, the actor said, 'that's so gay,' and I was shocked that not only that they put it in the movie, but that they put that in the preview," said Cooper in an appearance on 'The Ellen DeGeneres Show'.

"They thought that it was okay to put that in a preview for the movie to get people to go and see it."

"I just find those words, those terms, we've got to do something to make those words unacceptable cause those words are hurting kids. Someone else I talked to recently said that the words people use and the things people say about other kids online, it enters into their internal dialogue."

"And when you're a kid, it can change the way you see yourself and the way you think about yourself, and the worth that you give to yourself. I think we need to really focus on what language we're using and how we're treating these kids."

"It's incredible when you realize how commonly the term 'that's so gay' is among kids today," Cooper said. "It's used not just against kids that are gay or lesbian, it's used as an insult to anybody in this day and age among kids and that's something that has to stop."

The trailer, as it was previously cut together, had Vince Vaughn open with the line, "Ladies and gentleman, electric cars are gay."

"The teaser trailer for 'The Dilemma' was not intended to cause anyone discomfort," says Universal in a statement. "In light of growing claims that the introduction to the trailer is insensitive, it is being replaced. A full trailer, which has been in the works for some time, will be released soon."