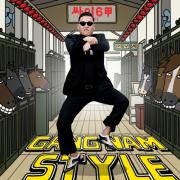 'Gangnam Style's Psy doesn't just like to do the horse-riding dance. He also likes to drink.

In an interview with the UK's 'Sunday Times', the singer reveals that he is a heavy drinker.

"He drinks all day and all night. Korean vodka is his 'best friend' and his 'vice partner,'" the interviewer describes the piece.

Psy says the only time he isn't drinking is when he's "hungover," and that happens "a lot."

The South Korean also opens up about being abused by his father and spending time in jail.

Psy claims his father "carried on hitting him even as an adult, until he wrote a song in 2006 about his father's 'loneliness' and the 'huge barrier between us.'"

He then heard from his mother that his father "had decided he was going to make more of an effort. 'I thought, wow, the power of music.'"

The artist also talks about what it was like to be arrested for possession of drugs in 2001.

"But as an artist, the more experience, the better the creation. I'm a very positive person. So if shit happens, I think maybe this happens because a huge amount of happiness is coming to me."