FX Says Planned Tracy Morgan Series 'Will Be Waiting for Him' 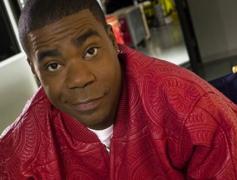 FX Networks says that its planned series with Tracy Morgan will be waiting for him once he's fully recovers.

Morgan was critically injured in a highway crash Saturday in New Jersey.

"The only thing we are concerned with is the health and recovery of Tracy Morgan and the victims of this tragic accident," FX said in a statement.

"We will support Tracy and his family in every way possible throughout his recovery."

"At the point when Tracy has recovered and decides that he is ready to go back to work, his show will be waiting for him. Right now our thoughts and prayers remain with Tracy, the other victims of the accident, and their families."

The truck driver charged in the fatal highway crash that killed another comedian, James McNair, was driving a truck when he swerved to avoid slowed traffic and plowed into Morgan's limo bus. Three others were injured.

Authorities have said Kevin Roper hadn't slept for more than 24 hours before the accident.