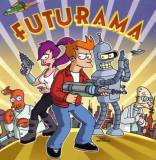 'Futurama' is coming back. Well, sort of.

Fox Home Entertainment has announced that 'Futurama: Bender's Big Score', the first full-length feature based on the animated Fox series, will be released directly to DVD. 'Futurama' went off the air in 2003. They say three additional movies will be released individually by the end of 2008, all with the original creative team and voice cast on board.

The plot will center on the 'Futurama' crew fighting to save Earth in an epic battle against alien scammers. Bender, the robot, soon comes under the alien's spell and is sent back in time to loot the Earth of its greatest treasures.

In the past Bender runs into Al Gore, who guest stars as himself, during the 2000 presidential recount, rapper Coolio and comedian Sarah Silverman (photos