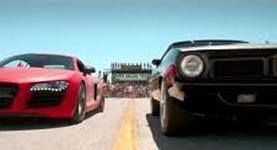 The first trailer for the seventh installment in the 'Fast & Furious' franchise, 'Furious 7', has been released.

Instead of tip-toeing around Paul Walker's death, the trailer heavily features the late star with one large stunt sequence, talk of "one last ride" before slowly closing with him in the trailer's final scene.