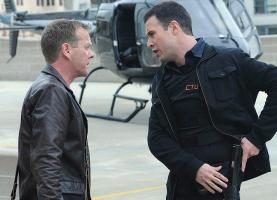 Freddie Prinze Jr. has slammed Kiefer Sutherland and says he almost wanted to quit acting after working with the '24' star.

"I did 24, it was terrible. I hated every moment of it," Prinze tells ABC News in an interview actually about his new Disney XD series 'Star Wars Rebels'.

"I just wanted to quit the business after that. So, I just sort of stopped."

"Kiefer was the most unprofessional dude in the world," he rails. "That's not me talking trash, I'd say it to his face. I think everyone that's worked with him has said that."

"I went and worked for Vince McMahon at the WWE, for Christ's sake... but, at least he was cool and tall. I didn't have to take my shoes off to do scenes with him, which they made me do."

Sutherland is said to be closer to 5'9". In any case, in a statement the actor's publicist takes the diplomatic route.

"Kiefer worked with Freddie Prinze Jr. more than five years ago, and this is the first he has heard of Freddie's grievances. Kiefer enjoyed working with Freddie and wishes him the best."