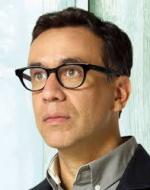 "Finally he showed up and he did this," says Armisen doing the thumb gesture. "He did the Invisa to me. Couldn't believe it. So then we took a picture but he was a little nervous about it."

"And I said 'Don't worry, I will never show this anywhere. I'm not going to post it anywhere'. So I had this picture of him. He's smiling but I can't show it because I promised him."

"I almost showed it today but it wouldn't be nice. But what I did was, just now, backstage, I drew a picture of it."

Armisen then shares the drawing to show what the meeting looked like.