Fox News' Wallace: 'You Don't Get To Tell Us What To Do Any More Than Obama' 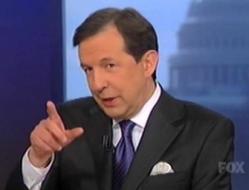 In an interview on Fox News Sunday, anchor Chris Wallace took Chief of Staff Reince Priebus to task over President Donald Trump's repeated statements that the media is the real "enemy of the American people."

"Reince, here's the problem: I don't have any problem with you complaining about an individual story," Wallace said.

"He said that the 'fake media,' not certain stories, the 'fake media,' are an enemy to the country," Wallace said as Priebus tried to downplay Trump's dangerous remarks. "We don't have a state-run media in this country. That's what they have in dictatorships."

When Priebus complained that Trump's possible Russia connections were receiving more coverage than his meetings with other heads of state, Wallace replied: "You don't get to tell us what to do, Reince."

"You don't get to tell us what to do any more than Barack Obama did. Barack Obama whined about Fox News all the time, but I've got to say, he never said we were an enemy of the people."

Senator John McCain also spoke out against Trump's attacks on NBC's Meet the Press this weekend.

"If you want to preserve democracy as we know it, you have to have a free and, at many times, adversarial press," McCain said. "Without it, that's how dictators get started."

"When you look at history, the first thing that dictators do is shut down the press. And I'm not saying that President Trump is trying to be a dictator. I'm just saying we need to learn the lessons of history."