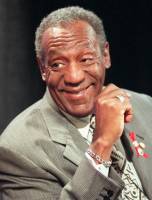 Former NBC employee Frank Scotti, who worked as a facilities manager at the studio where 'The Cosby Show' was taped, says the comedian regularly preyed on and paid off women.

"He had everybody fooled," Scotti tells the New York Daily News. "Nobody suspected."

"I felt sorry for the women," he says. "I was suspicious that something was going on. I suspected that he was having sex with them because the other person he was sending money to (Shawn Thompson) he was definitely having sex with."

Cosby, while denying paternity, paid more than $100,000 to Thompson over the years after their affair began.

"Why else would he be sending money?" Scotti asks. "He was sending these women $2,000 a month. What else could I think?"

Scotti saved copies of money orders. He says Cosby would give him "a satchel of money, all $100 bills" when asking him to send the money.

"I did a lot of crazy things for him. He was covering himself by having my name on it. It was a coverup. I realized it later."

When a New York city modelling agency would send women to audition for the show, Scotti says Cosby would often meet with them behind closed doors.

"The owner just walked right out. She knew exactly what was going to go on. 'I want you to keep that one girl here,'" he recalled Cosby telling him. "Then he'd tell me, 'Stand outside the door and don't let anyone in.'"

He says he eventually stopped working for the show because he was bothered by what Cosby was doing.

"It bothered me," he says. "You've got all of these kids, every time. I used to like him, but that's the reason I quit him after so many years — because of the girls."

"I felt like a pimp. Every time he had somebody, I had to watch and had the girl stay there. I felt dirty."