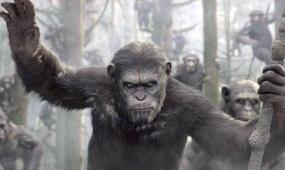 The sequel, set a decade after the events of the 2011 film, picks up with the apes having their own weapons and army.

The featurette aims to explain how the apes got from the stage at the end of 'Rise' to 'Dawn' with the use of news reports.

'Dawn of the Planet of the Apes' has a release date of July 11.