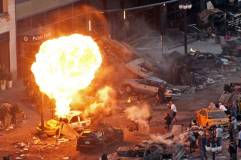 The family of the Chicago woman severely injured as an extra on 'Transformers 3' is suing the studio for negligence.

According to the lawsuit, Gabriela Cedillo sustained "serious injuries and brain damage" when the stunt being filmed in Hammond, Indiana went horribly awry.

"Preliminary investigation revealed that shortly before 7 PM, the movie crew was filming a stunt using numerous vehicles and drivers," the Indiana State Police report read. "During this stunt, an object struck a 2006 Toyota, hitting the vehicle, and then went through the windshield hitting the driver."

The tension cable was what snapped and shot through the windshield of the Toyota, which was personally owned by the 24-year-old female, who was an extra and not a member of the stunt team.

The cable sliced open her skull and the car travelled about a mile and repeatedly hit into a concrete barrier as it rolled before it came to a stop.

Cedillo was airlifted from the scene in critical condition and underwent surgery to relieve swelling in her brain. She has since shown some signs of improvement, including making small movements and breathing on her own, however, she isn't expected to make a full recovery.

So far Paramount has covered all her medical bills and it is very likely that the studio will settle with the family.

"We are all terribly sorry that this accident occurred," Paramount says in a statement. "Our thoughts, prayers and best wishes are with Gabriela, her family and loved ones. The production will continue to provide all the help we can to Gabriela and her family during this difficult time."