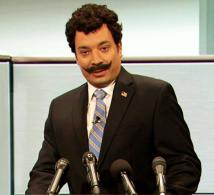 "Today I would like announce my candidacy for mayor of the New York city," says Danger. "Anthony Weiner may not be running anymore but, do not fear, Carlos Danger never pulls out."

"New York city is facing a crisis. Take it from me -- a man who has been in an out of many hairy situations."

"If elected, I will turn New York city around and give it exactly what it needs. I'm not afraid to do the dirty work. I'm not afraid to fight corruption. After all, danger is my middle name. It's also my last name. Carolos Danger Danger."

"In conclusion, there will soon be a vacancy for the position of mayor of New York city. And I would love to fill that hole. Thank you. God bless you and Adios."