Facebook's Zuckerberg Announces He Will Donate $45 Billion To Charity 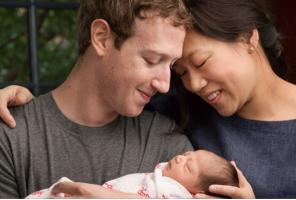 Facebook CEO Mark Zuckerberg and his wife say they plan to donate 99% of their wealth, roughly $45 billion, in celebration of their new baby daughter, Max.

Zuckerberg said says he plans to commit 99 percent of their Facebook stocks to causes such as fighting disease, improving education and building strong communities and is forming a new organization, called the Chan Zuckerberg Initiative.

"Like all parents, we want you to grow up in a world better than ours today," the 31-year-old Facebook founder and his wife write in a lengthy letter to their daughter.

"While headlines often focus on what’s wrong, in many ways the world is getting better. Health is improving. Poverty is shrinking. Knowledge is growing. People are connecting. Technological progress in every field means your life should be dramatically better than ours today."

"We will do our part to make this happen, not only because we love you, but also because we have a moral responsibility to all children in the next generation."

"We believe all lives have equal value, and that includes the many more people who will live in future generations than live today. Our society has an obligation to invest now to improve the lives of all those coming into this world, not just those already here."

"Our hopes for your generation focus on two ideas: advancing human potential and promoting equality."

After expanding on those ideas, the couple conclude: "Max, we love you and feel a great responsibility to leave the world a better place for you and all children."

"We wish you a life filled with the same love, hope and joy you give us. We can't wait to see what you bring to this world."

The letter is simply signed "Love, Mom and Dad."

The announcement has stunned the charity world. To put it into perspective, the entire Bill and Melinda Gates Foundation has an endowment of $41 billion.

Zuckerberg and Chan announced last July that they were expecting a daughter, after Chan had three previous miscarriages.