Evicted 'Survivor' Contestant Admits He Was 'Delusional' and 'Lost His Mind' 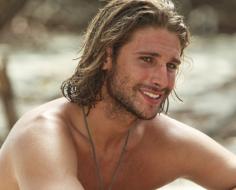 This week's evicted 'Survivor' contestant, Drew Christy, admits he "lost his mind" when he decided to throw the immunity challenge and believed he was the "kingpin" of the tribe.

"I shouldn't have thrown the challenge," Drew admits in an interview with TV Guide. "I think I kind of pissed off the producers and I kind of shot myself in the foot with that. I was definitely delusional with no sleep and no water."

"I also said some things I regretted afterwards. But I was also fighting the elements for 10 days and kind of lost my mind a little bit, turned into a looney toon. It was actually kind of hard for me to watch last night."

"I think I was threatening to some of those people out there, and I kind of learned a little bit about myself and grew a little bit of respect for the game. There was definitely a lot of things that went on out there that weren't shown."

"They kind of showed me being, like, the lazy, cocky guy and kind of made it seem like I wasn't cool with everybody, but I really was. I was good friends with pretty much everybody out there and helped all the girls open coconuts so they could drink, got firewood, built the whole shelter pretty much."

"I just was a pretty cool, calm and collected guy out there and was making the best time of it until Day Number 11, when I played way too hard too early in the game. The second you think you have it all figured out, you realize you don't."

Drew says, in fact, he wasn't the only one who decided to deliberately lose the challenge.

"People knew I threw the challenge," he says. "Jeremy and Jon sat out of it, and they were the ones that kind of strategized with me to throw it."

"You don't sit your best players out on challenges. Jon and Jeremy were definitely our strongest physical players that could have helped us win that challenge."

"I think that, combined with Exile Island, really just set me back. I was on Exile Island away from my tribe for 24 hours, and that was enough time for me to fall out of the loop with my tribe and my alliance."