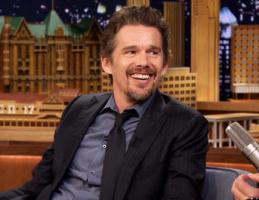 Ethan Hawke tells Jimmy Fallon about his new parenting book, Rules for a Knight, in which he uses knights to explain life rules to children.

Ironically, Ethan Hawke's marriage to Uma Thurman ended in 2003 after he allegedly had a relationship with Ryan Shawhughes, the nanny to children. We're pretty confident that's not something a knight would approve of.

Hawke tied the knot Shawhughes three years after his divorce was finalized in 2005, but the actor still denies he was involved with her while being married to Thurman.