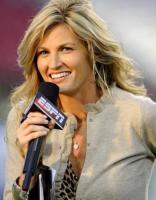 ) has revealed that she was diagnosed with cervical cancer last September and underwent surgery to successfully treat it.

The 'Dancing with the Stars' co-host and NFL sideline reporter tells Sports Illustrated that she was diagnosed after a routine checkup, shortly after she settled a $55 million civil lawsuit for being secretly videotaped while nude in her hotel room.

"After the trial everyone kept telling me, 'You're so strong for going through all of this, for holding down a job in football, for being the only woman on the crew,'" Andrews says.

"Finally I got to the point where I believed it too. 'Hey, I have cancer, but dammit, I am strong and I can do this.'"

Andrews says she didn't tell her colleagues about the diagnosis and worked a game before flying to Los Angeles for the procedure. She flew to Green Bay, Wisconsin, to film a feature with Packers star Jordy Nelson two days later.

"Let's just say the doctor didn't recommend that," she admits. "But just as I felt during my trial, sports were my escape. I needed to be with my crew."

A month later, she was told "the margins were clear" and "there would be no need for radiation or chemotherapy."

"That I had this extra baggage with the scandal, I didn't want to be any different. I felt that way about being sick too. I don't want players or coaches to look at me differently," says Andrews.

Andrews got engaged to boyfriend Jarret Stoll at Disneyland in December. She is scheduled to cover Super Bowl LI and also expected to return as a co-host on 'Dancing with the Stars' when it returns in March.