Emma Watson: 'Beauty and the Beast' Is 'Pure Escapism' 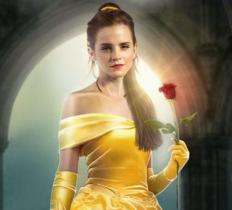 ), who stars in Disney's live-action 'Beauty and the Beast', compares playing Belle to Harry Potter's Hermione Granger in the upcoming issue of Elle UK.

"For me, Beauty was the perfect, most joyful thing to do," says Watson, who began her role in the wizarding films at the age of 11.

"There was something connected about Hermione and Belle, and it was good to be reminded that I am an actress; this is what I do," says the now 26-year-old. "The film is pure escapism."

Along with her starring role, Watson also lends her voice to the film's songs.

Watson says since Harry Potter wrapped up she's made an effort to become more involved in efforts like HeForShe, which urges men to join the fight for gender equality.

"It wasn't about me necessarily proving anything," she explains. "I was just thinking that I have this year to myself, so let's see what we can do to 'move the needle' and make a difference."

"There is a level of criticism that comes with being an actress and a public figure, which I expect, but once you take a stance on something like feminism, that's a completely different ball game."