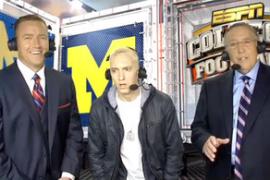 Eminem tried to throw off Kerk Herbstreit and Brent Musburger in a live interview during the Michigan-Notre Dame halftime show on ESPN Saturday night.

The rapper, who was appearing to promote his new single and video 'Berzerk', gave a blank stare with his mouth hanging open before he told the pair he wasn't used to live interviews.

"Live TV freaks me out a little bit," he said.

The singer later told Musberger he was a big fan of the announcer.

"You're a legend," Eminem said, to which Musberger replied, "You my friend, are the legend."