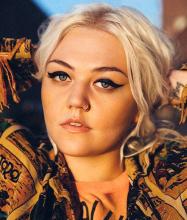 Elle King says she was high "as f--k" while walking the red carpet at the Grammys on Sunday night.

"Note to self," she captioned a photo of herself from the event on social media. "Don't eat a bunch of pot muffins before the Grammys red carpet" with the hashtag "AccidentallyHighAF."

As for her floral dress and matching flower headband, King joked: "Sometimes when you're accidentally high af from pot muffins, you don't realize you're A F-----G SNAPCHAT FILTER until after the Grammys and people tell you."

"This is what happens when you're accidentally rly stoned at the Grammys," she said sharing a clip from an interview. "You see something shiny, forget that you're on camera, then forget the question, then remember no one should ever let me be interviewed."

The 27-year-old King is the daughter of actor Rob Schneider and was nominated for her song 'Different for Girls'.