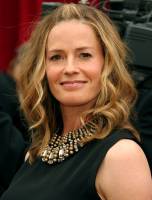 Shue, who earned an Oscar nomination for her role in 'Leaving Las Vegas', will replace the departing Marg Helgenberger on the Vegas-set 'CSI'.

Shue's character will arrive on the scene shortly after taking an anger management course and viewers will discover she has a past with Ted Danson's character that "didn't go so well."

"While it's difficult to say goodbye to a beloved character like Catherine Willows, it's exciting to start a journey with a new CSI, especially when that character is played by Elisabeth Shue," says executive producer Carol Mendelsohn.

"The new CSI also struggles with 'brutal honesty issues' and suffers no fools."

Her character's first appearance will be on the February 15, 2012 episode.

Helgenberger initially planned to leave the show at the end of last season, but decided to stick around to work with Danson for one season.