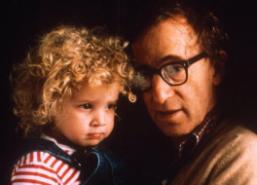 Dylan Farrow has renewed molestation allegations against Woody Allen in an open-letter to The New York Times that the newspaper published on Saturday.

In the letter, Dylan Farrow claims that "when I was seven years old, Woody Allen took me by the hand and led me into a dim, closet-like attic on the second floor of our house. He told me to lay on my stomach and play with my brother's electric train set. Then he sexually assaulted me."

Allen's adopted daughter with Mia Farrow writes: "He would take me away from my mom, siblings and friends to be alone with him."

"I would hide under beds or lock myself in the bathroom to avoid these encounters, but he always found me. I thought this was how fathers doted on their daughters. But what he did to me in the attic felt different. I couldn't keep the secret anymore."

"He talked to me while he did it, whispering that I was a good girl, that this was our secret, promising that we'd go to Paris and I'd be a star in his movies," she continues. "These things happened so often, so routinely, so skillfully hidden from a mother that would have protected me had she known, that I thought it was normal."

These letter has reignited accusations of abuse that first surfaced in 1992 after Allen and Mia Farrow split up.

Farrow says she wants the issue to be brought up because she has struggled with guilt, mistrust and even cut herself due to the abuse since childhood.

"Woody Allen was never convicted of any crime. That he got away with what he did to me haunted me as I grew up. That torment was made worse by Hollywood," she writes.

"Actors praised him at awards shows. Networks put him on TV. Critics put him in magazines. Each time I saw my abuser's face — on a poster, on a t-shirt, on television — I could only hide my panic until I found a place to be alone and fall apart."

"For so long, Woody Allen's acceptance silenced me. It felt like a personal rebuke, like the awards and accolades were a way to tell me to shut up and go away."

Farrow specifically asks Alec Baldwin, Cate Blanchett and Louis C.K. who appear in Woody Allen's Blue Jasmine, "what if it had been your child"?

"Woody Allen is a living testament to the way our society fails the survivors of sexual assault and abuse," she writes.

Allen was investigated on child molestation claims for the 1992 accusation, but was never charged. Later, Litchfield County state attorney Frank S. Maco said there was "probable cause" to charge Allen but decided against prosecution to avoid a traumatic trial for the young girl.

'Blue Jasmine' is nominated for three Academy Awards, including best original screenplay for the filmmaker.