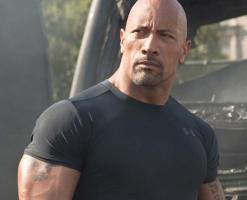 Johnson slammed his movie co-stars as unprofessional "candy asses" in a social media post in August. It was revealed by others on set that Johnson's rant was about Diesel.

The former WWE star said the cast should "conduct themselves as stand up men and true professionals" and "are too chicken s--t to do anything about it anyway."

Diesel told fans later that month: "So much has gone on this year. I can't believe I wrapped two back-to-back pictures I both starred in and produced. Now I get to return to my family, my life. So give me a second, and I will tell you everything. Everything."

He eventually simply praised Johnson and said that his co-star has always "shined" in the franchise.

"I was very clear with what I said. I've been in the game a long time," Johnson tells The Los Angeles Times.

"Would Universal Pictures have preferred that didn't happen? Sure, we talked about it. The irony is after that, and as they do their tracking and all their analysis, the interest shot through the roof to a whole other level."

The seven films in the hit franchise have earned more than $3.8 billion.