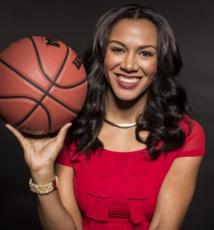 The singer, who was hosting the event and dressed in a classic tux, wrapped his arm around Ros as they posed for photos on the red carpet with her in a red midi-dress.

Drake has had his eyes on Ros since they first met in Toronto two years ago. In 2015, he shared a photo with her following the Toronto Raptors loss to the Golden State Warriors.

"When the post game makes you forget about what happened during the actual game," he captioned.

Ros calls games for NBC Sports Bay Area, the NBA on TNT, Pac-12 Network and the WNBA's New York Liberty on MSG. She's also a reporter for the Golden State Warriors and the San Francisco 49ers.