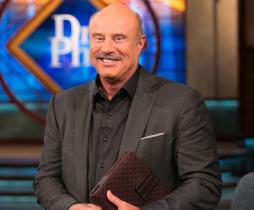 James Corden asks for Dr. Phil's opinion on Kanye’s recent tweets as he wonders "What is going on with Kanye West?"

"Well, come on. You can't be that wrong that many times in a row unless you're working at it," says McGraw.

"But we're so narcissistic now that everybody's doing selfie's now of brushing their teeth. I don't care!"

"You used to be stupid and get away with it," he concludes.