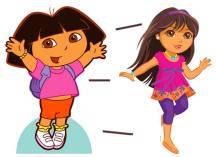 Caitlin Sanchez, who used to voice Nickelodeon's hit animated series 'Dora the Explorer', is suing the network for millions.

Sanchez, who was 12 when she was hired, says she was paid just over $5,000 per episode and promised a cut of merchandising revenue. However, after being dismissed from her role because could no longer provide the voice they wanted at 14, she is questioning their hiring practices.

The teen says that when she was shown the contract, she was given 22 minutes to sign the deal -- with no attorney and only her parents and agent present -- or lose the gig.

She says Nickelodeon promised her family compensation from merchandising and residuals on the brand. But then "used convoluted payment deduction clauses and additional free services provisions to underpay Caitlin for her acting and recordings, force her to work hundreds of hours marketing the Dora Brand for free and withhold her residual payments and merchandise percentages, all contrary to what she was originally promised."

According to the lawsuit, the damages add up to "many million dollars."

Sanchez's lawyer says that, moreoever, the contract was never submitted to a court for approval, as most deals involving minors need to be.

Nickelodeon has responded by calling the suit and its claims 'baseless'.

"Unfortunately, Caitlin's voice changed and she was no longer able to portray the Dora character, as happened with the actress who originated the role," it says in a statement.

"Caitlin's contract was extensively negotiated through her agent and in compliance with her union. She was well compensated for her work and for personal appearances. We have enjoyed working with Caitlin on 'Dora the Explorer' these past three years, and we did in fact offer her a contract for other work with us."