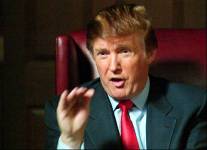 The 64-year-old -- who happens to love publicity stunts -- says he's considering running for the White House in 2012 because he's so worried about the state of the country's manufacturing industry.

"I've been asked for years to do it, and I had no interest," Trump says. "I'm totally being serious because I can't stand what's happening to the country. This is the first time I am seriously considering it."

"I don't know that I'll do it. It's probable that I won't do it, but I can tell you, I'm thinking about it. Somebody has to do something. We are losing this country."

"It's a big pay cut, that's true," he admits when reminded about the modest salary of Commander in Chief.

"I am a Republican, but have great respect for what the Tea Party has done because they have brought to light what's going on," he said. "I mean, we have trillion-dollar deficits. The country is going bankrupt, let's face it."

The Republican party is expected to choose a candidate from a field of about a dozen potential runners to challenge Obama in 2012 .