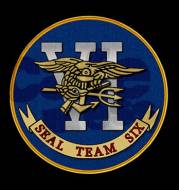 This after the US Navy challenged the studio's attempt to trademark the name by filing its own application with the US Patent and Trademark Office.

Disney had filed trademark applications to use the name 'SEAL Team 6' on everything from entertainment, toys, video games and clothing just two days after the raid. In response, the US Navy filed its own applications ten days later.

Generally the Trademark Office gives priority to the entity that filed for the trademark first, which in this case would have been Disney.

But since the US Navy already identifies themselves and has been using the name for years, it could have won by taking Disney to court arguing that customers could confuse the products to having a connection with the Navy.