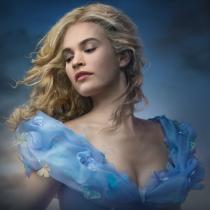 The familiar story of follows the fortunes of young Ella (Lily James) whose merchant father remarries following the death of her mother.

But, when Ella's father unexpectedly passes away, she finds herself at the mercy of a jealous and cruel new family.

Despite being relegated to nothing more than a servant girl covered in ashes, and spitefully renamed Cinderella, Ella is determined to honor her mother's dying words and to "have courage and be kind."