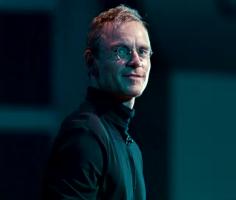 "It's very disappointing that when it was released wide across America it didn't really work, so it's retreated back now to the main cities," Boyle tells the BBC.

"It's very easy in hindsight, but I think it's probably that we released it too wide too soon."

The film had performed remarkably well when it was only in four theaters in New York and Los Angeles. However, after the film bombed after it went wide to weeks later and opened in seventh place.

Boyle said he thought distributors "should have built more slowly" but added he "wouldn't criticise" Universal.

"The history of the film is we were dropped by Sony," he explained, "and Universal have been exemplary in the way they've stood up for the film, promoted and supported us throughout the whole process - and I think are genuinely very proud of the film."

"Yeah sure, you might have done it in a different way... But you know, you've got to get on now."

'Steve Jobs' has earned a meager $17 million domestically for a total of $20 million worldwide on a production budget of $30 million. Add marketing to that and the film is in the hole over $40 million.

Boyle is hoping the film earns some redemption at the Oscars.

"After all, it's the Oscars, not the People's Choice Awards," he says.