Dina On Daughter Lindsay Lohan's New Accent: 'She Is A Worldly Person' 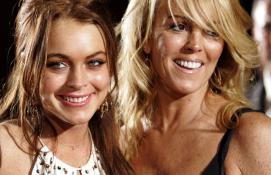 This after video of her speaking at the opening of her Greek nightclub showed Lohan's accent now carrying hints of British, Turkish and French.

"I have raised Lindsay and all my kids to constantly learn different languages and embrace different cultures," Dina tells Us Weekly. "Since Lindsay was a kid, she was speaking fluent Italian because my mother is Italian and would only speak to her in Italian. She taught herself how to speak French, Arabic, Greek, Hebrew and the list goes on."

"Lindsay has a very high IQ and is very intelligent and can pick up on any languages in a minute. She has that gift."

"She is overseas now focusing on giving back to kids who have been refugees, who have no place to go, who have no food, who have no clothes to wear or anyone to turn to, and she helps them get everything they need."

"She sits down and communicates with each kid no matter what background they have come from or what language they speak because that's her way of communicating to them. She is a worldly person who has so many talents and so much to offer, and that's what makes her so special and so beautiful."

Lohan has said she sounds different because she's learning many new languages at once.

"I'm fluent in English and French, can understand Russian and am learning Turkish, Italian and Arabic," she said.