Dennis Rodman Unhurt After His Land Rover Flips on Highway 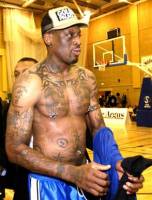 Former NBA star Dennis Rodman walked away unhurt after an SUV accident that saw the vehicle flip over on an interstate in South Florida.

This after Rodman was riding in a Range Rover that experienced a tire problem and flipped on Interstate 95 near Fort Lauderdale.

"Thank God he's OK," Rodman's agent, Darren Prince tells AP. "He walked out with a little scratch on his finger."

Prince said that Rodman told him, "'I'm still living brother. They can't get rid of me.'"

The driver of the SUV had a gash on his head, but was in stable condition.

Rodman had just returned to the US from the Caribbean, where he reportedly had a disc-jockey gig.