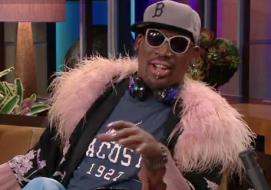 Dennis Rodman managed to top his trip to North Korea and meeting with Kim Jong Un with his visit to the Vatican which ended with him in the Popemobile.

A fact that even Rodman couldn't help but laugh about with Jay Leno on the Tonight Show.

"Oh my god, you know, it was amazing," laughed Rodman about how it happened. "Some news people asked me to come over saying 'You know Dennis since you're doing these things across the country why don't you just come over as a figure."

Rodman, dressed in attire that can only be described as unusual, clapped his hands and laughed as Leno showed a photo of him in the Popemobile.

"It's you know, whatever," he said when Leno asked how it happened. "We drive around Rome and I thought oh my god, people are looking at me. Look at that guy laughing."

"I was shocked at the fact that there have only been three people in America who have met the family: Jimmy Carter, Bill Clinton and -- all of a sudden -- me."